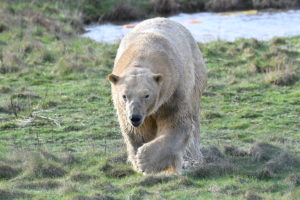 We’re welcoming a new Polar Bear to Doncaster, just in time for half term!

Rasputin was recommended to move to the Yorkshire Wildlife Park, home to the only Polar Bears in England, by the European Endangered Species Programme (EEP). He is fully grown at 12 years and weighs in at around 500kg.

His move was arranged as his mate Flocke had recently had cubs and needed to be kept separate from him while the cubs are small for their safety.

Organising the polar bear move has been months in the planning. His move was facilitated by an experienced team of vets and transport specialists and the journey was over 1,000 miles by road and ferry.

Rasputin will be kept initially in a separate reserve with his own lake for the first 4 months that he is at the Park due to quarantine requirements.

He will then be moved to join resident polar bears Victor, Pixel, Nissan and Nobby at the award winning Project Polar, the expansive 10 acres of networked reserves and lakes. The largest lake is 7.5m deep so the bears can dive and play in the cold depths.

Rasputin has been setting into his new home since his arrival on Wednesday 29th January and having made his official YWP public debut, enchanting members of the public already, we’re sure he will continue to do so for years to come.