Blog » How Not to Date online (with one boob)

How Not to Date online (with one boob) 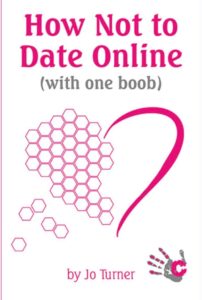 At 26 years old, Jo Turner from Doncaster was diagnosed with Triple Negative Breast Cancer. Married, with a daughter 18 months old, Jo was told after Chemotherapy, a mastectomy and radiotherapy that she had a 15% chance of living for the next 3 years.

Jo is still here 3 years later, having gone through a divorce and a house move, plus she has recently satisfied a lifelong ambition of writing a book! In ‘How Not To Date Online With One Boob’, she has chronicled four years of absolute hell in an attempt to do two things:

2 Raise money for Coppafeel, a charity dedicated to the early detection of breast cancer

“It is really quite common that younger women notice it just after having babies and sometimes their babies will stop feeding from one boob because of it…I believe this happened to me.” Jo Turner

Mum to a now 6 year old daughter, Jo is happily in a relationship after a long stint on the online dating game. Her book follows her journey through the lows of diagnoses and the highs of online dating, all wrapped up with thought provoking poems and fantastic illustrations. It is not your conventional book, but Jo is not your conventional person! She is a gutsy, savvy woman who has faced cancer head on, dealt with clinicians who, at the eage of 26, didn’t think she was capable of making decisions for herself, coped with divorce and becoming a single mum all at the same time.

Follow Jo through her first hand account of what dealing with cancer feels like. Jo is giving profits to Coppafeel and her book could make a real difference to other ladies who can detect cancer early.

Jo is hosting a pre-book launch at Luke’s (Queen Street, DN9 1HG)  in Epworth on Saturday 17th August at 7.30pm, with the book release set for mid September.