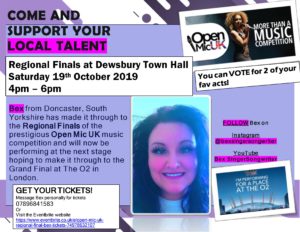 Bex, another Doncaster Mum, has made it through to the Regional Finals of the prestigious Open Mic UK music competition and will now be performing at the next stage hoping to make it through to the Grand Final at The O2 in London!

Thousands of hopefuls entered Open Mic UK nationwide and hundreds of auditioned on the day to impress the judges. Those who made it through the audition stage will now take part in a live head-to-head battle alongside the best talent in their region, performing in front of hundreds of audience members and a music industry judging panel in their bid to win a place at the National Grand Final.

Bex contacted me to ask for Mumblers to support her on the day. Bex is 31 and a fellow mum of two from Balby, who has covered the pub circuit for over 10 years – finishing to have her second child. Shes now re-discovering her dream and would love some support on the night to help her get through to the O2.

Naturally as a mother, I put my all into raising my two kiddies and started a 3 years Uni course when my second child was 8 weeks old.  I completed this in 2015, then went onto do the normal 9-5 within the Learning and Development field (Education Sector). It’s fair to say I lost myself for many years along with battling factors that linked to a childhood trauma myself. But the best thing about this is I have finally started to realize that it is OK to look after myself, believe in myself and explore my creativity. Which is exactly what I am doing now. I am writing my own songs now, three of which Mr Elliot Kennedy (a renowned music producer/singer/songwriter) based at Steelworks Studios, Sheffield has heard first hand and has invited me onto his Artist Development Program. So life is very exciting and feeling bright finally. My two children dance and sing to my songs daily and continue to provide me with the love, inspiration and drive to make this happen by whatever means possible for them. I currently home educate one of my children and am awaiting on news to whether I have been successful after an interview for a homebased customer service role.

Open Mic UK however is something I applied and auditioned for myself through my own means whilst I await to hear back from the Head of Steelworks Studios Artist Development Program for a starting date.

I am going to be performing an original upbeat song that I wrote, based on my rough journey to now with an aim of reminding myself how far I have come and with an ultimate aim to empower others out there who struggle with any sort of setbacks/emotional traumas that cause them to not rate themselves worthy. My passion is to share my music and uniqueness to pollute this world with more kindness and strength that it truly needs.

The audience has the power to cast two votes on the day, so if any Mumblers can go along and support another local mum, contact Bex for tickets on 07896 841583