The Director of Public Health Dr Rupert Suckling says he feels optimistic Doncaster will soon be in a position to safely open schools to a wider number of pupils.

He has written to schools across the borough to provide an update on timeframes for opening.

In the letter, Dr Suckling said he thinks it remains too early to open, but that he feels optimistic we will be in a better position soon thanks to the Test and Trace system now being up and running locally.

The major reasons why he believes it is still too early at the moment are:

👉The national bioalert level remains at 4, which is the same as when the last advice that schools should not yet open was given

👉Thanks to the launch of the NHS Test and Trace system last week, we are getting more detail about how coronavirus is circulating in Doncaster. We now know that there were double the number of cases (109) in the borough this week, compared to the figures provided on the national government website.

The situation continues to be monitored and a further update will be provided next week.

You can read the full letter from Dr Suckling here: 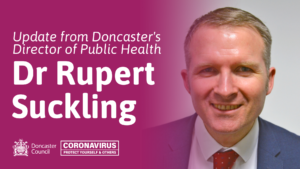