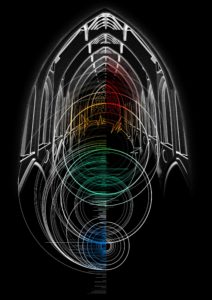 You might remember that Right Up Our Street bought the Museum of the Moon to Doncaster Minster last year. Over 16,000 people visited the Minster, including us to see it, it really was incredible.

Well this year, the popular DN Festival of Light is back and there will be a week of activities and events, which kick off with DN Light Night on Friday 22nd November 2019 and run until Wednesday 27th November 2019.

The centre piece of this year’s DN Festival of Light will be an audio-visual peice called ‘Tectonic’, bespoke to Doncaster Minster, that uses 3-D mapping and projection techniques. Created by NOVAK working with artist Ed Carter, the light projections will be a totally immersive experience covering the upper ceiling and walls of the iconic Minster building.

NOVAK has presented work throughout the world and at some of the most highly regarded arts festivals, including the UK’s largest light festival, Lumiere (London, Durham and Derry-Londonderry) and the internationally renowned Singapore Night Festival. Their work has also featured alongside many critically acclaimed musicians at some of the world’s leading music events; including Glastonbury and Coachella.

The DN Light night is running from 5pm-9pm on Friday 22nd November 2019 – this will officially launch the festival and for that night only there will be a variety of light installations including outdoor lightworks from artists such as Travelling Light Circus and Impossible Arts, which will be placed outside the Minster.

Only 2,500 tickets are available for this launch night Book Here (SOLD OUT already!

‘Techtonic’ will then be open to the public on Saturday 23rd November from 8pm-10pm and Sunday 24-Wednesday 27 November from 4pm-9pm. Tickets are not needed for these sessions.